Sicily has always been a wheat-rich region since ancient times. It’s even supposed since 3° millennium a.c. as testified by the finds of ancient daily life tools, like grindstones and pestles, found in Stentinello, a Neolithic village near Siracusa. The mythological tale of the kidnapping of Persefone, the daughter of the Goddess Cerere, concludes with the gift of wheat made by Cerere to the population, with the aim of ensuring her sustenance and the development of civilization.

The different wheat cultivations give the Sicilian landscape incredible colors, changing from one place to another, depending on the grain variety, the time and place of sowing

The selection of the Sicilian ancient grains varieties, the work of the Experimental Station of grain growing and the samples collection made by Ugo de Cillis that classifies wheat into durum and soft, give us the description of its main growing and biological properties.

The ancient grains grown in the past in Sicily, for a long time remained only in the memory of our grandparents. Then, finally, some forward-looking growers have renewed Sicilian ancient grains, selecting them grain by grain, with the use of innovative tools, before grinding them in the old mills in natural stone.

The flours produced today, unlike those of the past, are the synthesis of ancient gestures joined to the innovative technological instruments.

The ancient grains are usually processed with stone milling, producing a less refined flour, compared to that produced with modern wheat.

Among the most famous kinds of wheat we can find: Timilia or Tumminia, already used by the Greeks. 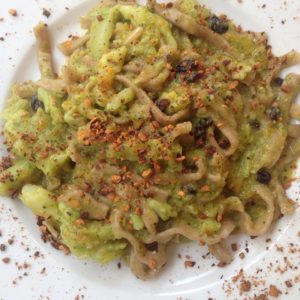 This kind of wheat is rare, prized and very resistant to drought. It is used for the famous Black Bread of Castelvetrano, one of the Slow Food Presidia, full of special properties, scented with malt, almonds and toasted wheat.

Maiorca is an ancient variety of soft white wheat, grown for centuries in Sicily. It is very high and is located in arid and dry soils. It’s a special wheat for many reasons: flavor, nutritional value, versatility of utilization and quick cooking time.

The wheat Russello is very digestible and nutritious. It ‘a high spike wheat, that can grow almost two meters tall. It is delicate, reddish and it is grown in arid soils.

This grain it converted into a flour used for many Sicilian products, such as pasta or bread.

From it is obtained a flour used for many products such as pasta and bread. Along with the best known Tumminia, it is one of 50 or more kinds of ancient grain that Sicily gives us.

Nowadays many pizzerias use to prepare their pizzas with these kinds of wheat.

A rich selection will allow you to discover all the services you can request to enrich and complete your stay. This is how your holiday will become unique!